Crash and burn… I’m not in the swing of blogging yet! I went almost a whole month agonizing about the tutorial I really want to post and how many pictures I have to edit for it instead of just doing it. Well, I did at least write up most of the words… It’s a month later, so I might as well blog about designing my blog. It’s a start, right?

So when I bought my domain, I made a pretty cute WordPress site so I’d have something up before attending a craft fair. I went to Colourlovers, because I picked out a really cool theme that could be automatically designed using that site. I designed a color scheme and ditzy little pattern and it was cute. Then WordPress wasn’t really living up to what I wanted it to, not that I really used the site much. So I did a switch to Drupal. And I kept my color scheme. But I never did anything with the site still.

Forward to now. I’ve used WordPress for more sites, and seen how much it has improved since I first used it. I trashed my old site AGAIN and started over. This time, from scratch.
Being that I fancy myself to be uber-cool despite totally not being so, I went with Bones to create my site design. It is lightweight, scales nicely between mobile and real computer screen sizes, and is HTML5. Woohoo, futurey. I already know enough about CSS to understand what’s going on under the hood. I definitely recommend it for other WordPress developers, but maybe not for the home blogger that just wants something pretty. OK, that sounded a little condescending. Sorry.

Now to find inspiration for my design… Standing at my computer on the kitchen island, I look around me. Right behind is the stained glass window I inherited from my grandparents. Made by my uncle one year for Christmas, this is The Thing that was set aside to be mine. OK, good start. So then from within Colourlovers (yep, I went there again), I made a new palette and uploaded this picture to pick out the colours (British spelling is more fun!) for my site. And the pattern came from their pattern designer too. Here’s what I got! And… in the vein of not making this a TL;DR… I’ll make a post next about the rest of the design process!

Continued at About my design – Part 2!

Some other great posts 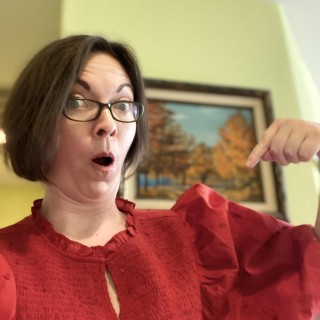 Darcie is a mom of three and someday will decide what she wants to be when she grows up. She has never met a craft she didn't like, except for scrapbooking because seriously, who has time for that? Darcie is a fan of the arts and social welfare and being a fan of things. She's probably already a fan of you on Facebook. She's a WordPressdotcom Expert, phpBB Team Member, and corn allergy person. https://darcie.link has most of the links to her other links.